Construction materials skyrocket…if you can get them 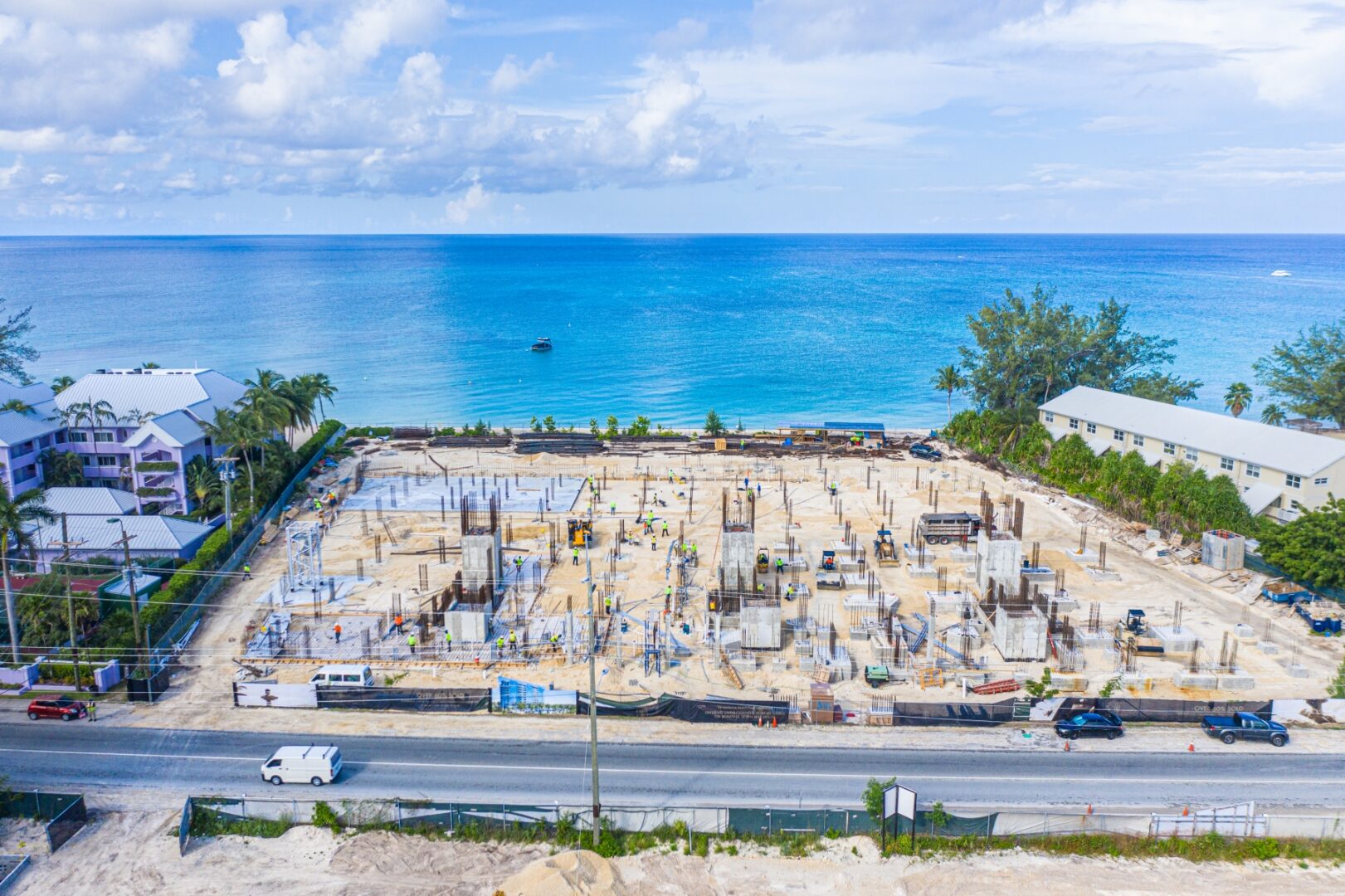 As I’ve mentioned in several articles, housing prices are continuing to increase in the Cayman Islands, as well as in much of the world due to several reasons. In addition to the many factors I’ve previously touched on including the work-from-home movement, a desire to live outside of major metropolitan markets, and many homeowners re-evaluating what home means, there are two other key factors driving up property values that particularly impact new construction: building and shipping costs.

Since the pandemic began in early March 2020, everything has changed when you look at what it costs to build a home or development. Construction costs have gone through the roof and the knock-on effect surrounding construction such as shipping costs, and product availability and accessibility are impacting new housing development across the globe.

From lumber to paint to concrete to everything in between, the costs of almost every item that goes into building a home or new development are soaring. In some cases, the price increases have topped 100% since the pandemic began and the cost to build an average home in the US has increased by at least 50% in the last two years.

Keep in mind that this 50% increase is for the cost of building a house but the actual labour and land prices although they have increased have not increased by 50% in the last 2 years. “We are seeing wage increases in the construction industry up to 20%,” said David Johnston, President of the Cayman Contractors Association. “That is in addition to the shortage of labourers currently on island.”

The demand surge from the building boom has lifted concrete prices sharply, up 104%, placing it second to lumber in terms of price increases which reached a record high in April 2021.[i] Besides having an expensive ingredient, cement, there are other factors that make concrete expensive including that high-strength and high-performance concretes used in large scale projects are already more expensive that traditional concreate. If concrete is reinforced with steel that will also increase the price due to rising steel costs.

“The shortage of concrete is having the biggest impact on the construction industry in the Cayman Islands,” said David Johnston, President of the Cayman Contractors Association. “Our industry is already working with government to resolve this situation as its related not only to the global shortage but the overall logistics of shipping and receiving concrete in Cayman.”

A key component in every new build is lumber and although most new construction in the Cayman Islands is built with concrete or concrete blocks, lumber is used not only in roofing, but in parts of the framing of a home, in the smaller, finer work, including the trim around doors and windows, and cabinets in kitchens and bathrooms.

Lumber prices have almost doubled since Fall 2020 and gained momentum at the beginning of the year and then catapulted by May. Lumber futures—a type of contract that allows people to buy or sell commodities for a certain price on a fixed date—hovered around $700 per thousand board-feet in late January. By May, it doubled to roughly $1,400.[ii]

“We are seeing costs skyrocket with respect to lumber products,” added David Johnston, President of the Cayman Contractors Association. “Sheets of plywood used to be priced at $34 and we are seeing those over $100 now. This shortage is due, in part, to the very active residential market particularly in the SE US.”

Drywall has increased 26% in the last two years and builders are also paying more for plumbing, due to a shortage of PVC pipes, which are commonly installed rather than metal. The severe 2021 winter storm that temporarily took power down in Texas, where most PVC is manufactured, reduced US supplies. Record high copper prices, meanwhile, are adding to the cost of electrical wiring and air conditioning systems.[iii]

Prices for appliances are also surging, with major manufacturer Whirlpool Corp. phasing in price increases between 5% and 12% this quarter due to strong demand and higher metal costs. “Material costs are still increasing and will likely keep doing so until the third quarter,” Chief Financial Officer Jim Peters said in April.[iv]

Even once a house is built, costs continue to climb when it comes to furniture. Furniture prices rose over 5% in the past year, their biggest jump since 1982.

The US Consumer Price Index, a measure of the average change over time in the prices paid by consumers for a market basket of consumer goods, rose 5% in May year-over-year and prices rose 0.6% from April to May 2021. In fact, consumer prices rose in May at the fastest rate since 2008.[v]

In May 2021, Canada’s inflation rate surged to highest level in a decade, at 3.6%. The cost of just about everything is going up at a much faster pace than usual, from shelter and vehicles, to food, energy, and consumer goods.[vi]

It’s important to keep in mind that some of May’s jump in prices can be attributed to the very low prices we saw across the board last May during the beginning and thus massive shutdowns caused by the worldwide pandemic.

If you can get materials

The demand for almost every product has increased substantially as much of the world starts to get back to normal with many people spending stimulus funds received during the pandemic as well as money saved during the last year-and-a-half. In addition, the move to “just in time” manufacturing over the last half-century, in which parts are delivered to factories when needed, has led to a massive shortage of almost all goods.[vii]

Coupled with increasing prices across the board, wait times to receive materials has gotten much longer. Many products that traditionally took 1 to 8 weeks in late 2020 are now taking 6 to 30 weeks. The spread of COVID-19 sidelined port workers and truck drivers, impeding the unloading and distribution of goods made at factories, which also saw shutdowns and staffing shortages.

“We are seeing supply chain challenges on just about everything from steel to electronic components to everything in between as the world slowly starts to reopen,” added David Johnston, President of the Cayman Contractors Association. “If one component for materials such as windows, doors and stud work is missing it obviously effects the final product.”

To add to these delays, on March 23, a cargo ship became wedged in the Suez Canal before being dislodged six days later. According to tracking data from Lloyd’s list Intelligence, 372 vessels were stalled waiting to transit the canal. This blockage had a domino effect of global supply chain disruptions further straining containership stages, including the delivery of raw materials that will also impact downstream production and manufacturing of all kinds of consumer goods. The top impacted areas were the United States and Europe.[viii]

Coupled with increases on overall construction materials, shipping costs continue to increase adding to the rising cost of all materials. There continues to be a shortage of shipping containers due to the high demands of every product that comes to the US from other countries.

So where have the containers gone? Many are in inland depots. Others are piled up in cargo ports, and the rest are onboard vessels, especially on transpacific lines. When the pandemic halted much of shipping, containers piled up as the number of vessels out at sea also declined. This put the brakes on import and export, but it also meant that empty containers from North America couldn’t be picked up. There was no time to clear the very large backlog of containers with limited workers before more started arriving. North America currently faces a 40% imbalance, which means that for every 100 containers that arrive only 40 are exported.[ix]

“The cost of fuel is also up, which is adding to overall costs,” added David Johnston, President of the Cayman Contractors Association. “Trucking costs in the US, which we cannot control, are through the roof.”

How long with prices continue to escalate?

How long it takes all these industries to catch up with demand by increasing supply is anyone’s guess, but experts don’t anticipate a meaningful drop in prices anytime soon as the demand will continue to outweigh the supply well into next year.

“The price spikes could be bigger and more prolonged because the pandemic has been so disruptive to supply chains,” said Mark Zandi, chief economist at Moody’s Analytics. But “by the fall or end of the year,” Zandi suggested, “prices will be coming back to earth.”[x]

“The Cayman Islands has traditionally lagged behind the US when it comes to a recession by about 12-18 months,” added David Johnston, President of the Cayman Contractors Association. “But this situation is definitely different. It may take us a bit longer to normalize compared to the US with respect to pricing, product and shipping times, but it really depends on how quickly the world can get back to work.”

Several factors will continue to contribute to this demand for construction materials and thus new development including the extremely low interest rates, which aren’t anticipated to increase until late 2022 or even into 2023. Similarly, as more and more people continue to re-evaluate their living situations from their individual homes to the actual city or country they live in, the housing demand and thus new construction demand will continue.

Hopefully after a surge in pricing and a delay in receiving materials, things will get back to normal and we will settle back down to a steady 2% inflation rate as the world’s economies get back on track.

What does this mean for Cayman?

If you are looking to build in Cayman, the reality is that land prices are continuing to rise especially as less land is becoming available for purchase. If you haven’t acquired the land, it is reasonable to say that the land value now could offset the difference in the increased construction costs we are currently seeing. On the other hand, if you are looking to build and don’t have to build right now, you could always purchase the land now and wait to start construction.

Interest rates are extremely low right now which is undoubtedly driving the marketplace, but this won’t last forever. Lower interest rates even coupled with higher construction costs could also offset the difference of waiting until construction prices normalize.

Additionally, existing properties will continue to appreciate due to the increasing replacement cost as well as the lack of land available for building.

It ultimately comes down to each person’s individual financial situation. Some people may not be able to wait until things normalize due to an expanding family or if they are in the middle of construction with existing contracts. It’s important to take into consideration all the factors when it comes to new construction and if you have any questions or need guidance, please do not hesitate to contact me at +1 345 945 4000.

I’d like to thank David Johnston, President of the Cayman Contractors Association, for his valuable contribution to this article.