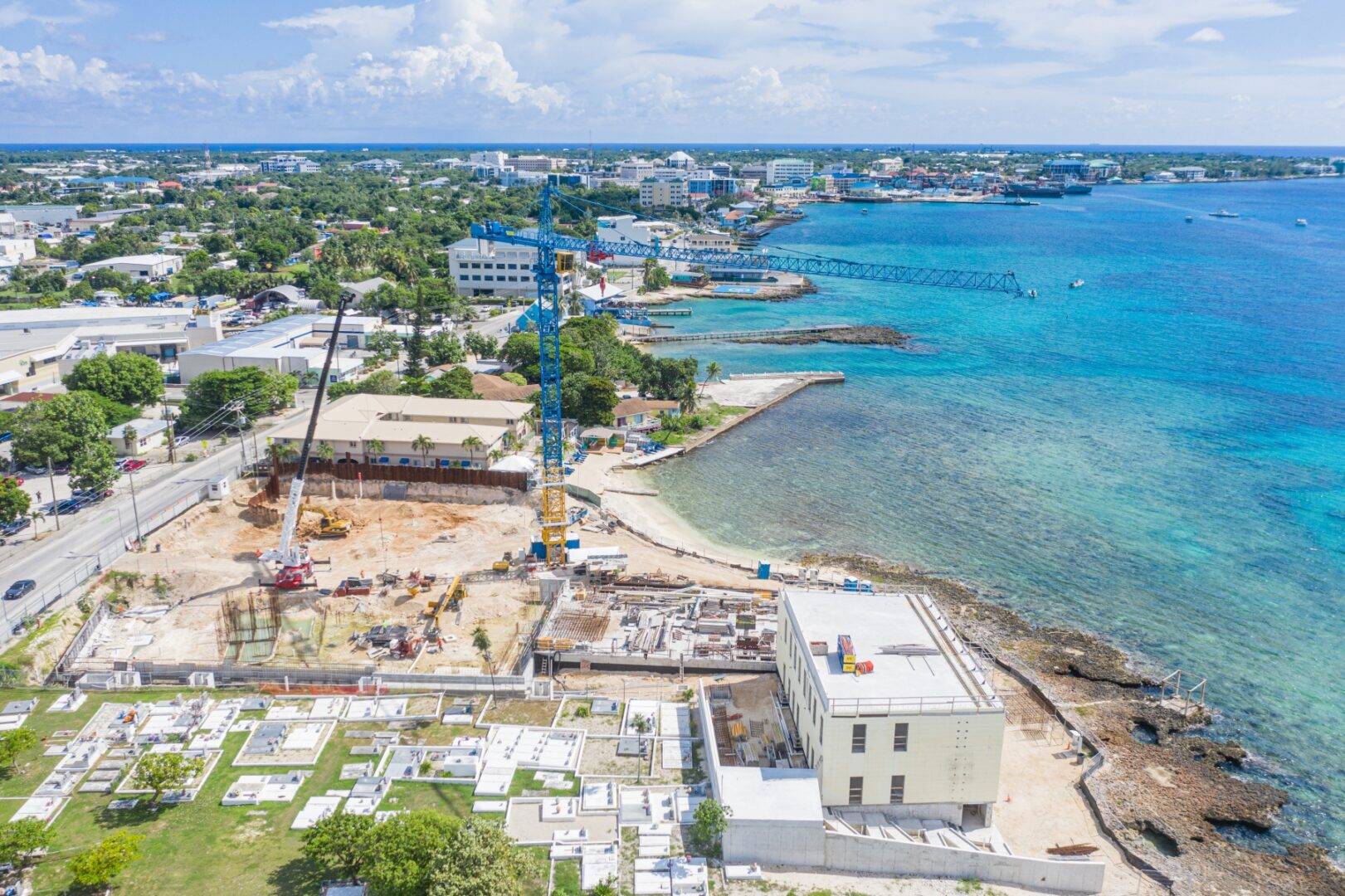 A country’s development plan is essential as it lays out where we are and where we are heading. It is critical for a country such as the Cayman Islands which is small especially with our current growth rates. Grand Cayman has a total area of only 76 square miles, Cayman Brac’s total area is 14 square miles and Little Cayman is only 10 square miles.

Right now, it could be argued that we don’t have a development plan and that our islands are rapidly developing without one, but the government has recently announced that they plan to get this back on track in the new year.

I thought I’d take this opportunity to explain how developers are working with an outdated development plan and ever-changing planning regulations, explore how the lack of a current development plan has spurred new movement in this area, as well as discuss the implications this has with respect to future development and real estate in our islands.

When that report was released “the premier [Wayne Panton] said ad hoc, unplanned growth had left the country without proper systems and structures to optimise development amid ‘infrastructure struggling to keep up and the lack of a proper development plan to ensure our sustainable future’.”[ii]

It would not be unrealistic to think that number even 10 months later is much higher. In fact, “Cayman’s population now stands at 78,554, an increase of 10.5% over the number of people counted in the October 2021 census.”[iii]

“There were seasonal contributory factors to the population increase, such as accounting firms bringing in additional staff for their busy period and tourism picking up following easing of COVID travel restrictions, leading to the hiring of extra employees to deal with the growing number of travellers.”[iv] It is anticipated that our population numbers will increase again between now and the beginning of the year with our borders fully open and even more employees needed for inbound visitors into the 4th quarter and beyond.

At the time this report was released “premier Wayne Panton said work on Cayman’s development plan, which is supposed to chart the way forward for the country, will not be ready by the end of the PACT term.”[v]

“I think everybody will understand and, [as] has been acknowledged in the past, [it] is not something that is a six-month project or a 12-month project. It’s, unfortunately, a multi-year project. So while it is under way, we’re not expecting to have the full development plan completed for the country probably until into the next term. At this point, we’re probably going to have perhaps half of it done by the end of this term,” he said.[vi] The next election is in April 2025.

The last development plan for the Cayman Islands was created back in 1997. That is 25 years ago. That very outdated plan remains the current plan although there have been attempts to update it over the years.

Just keep in mind, we are working with a development plan that is 25 years old when our population was approximately 42,000 based on the growth statistic cited above indicating that our current population is 70% larger than just 25 years ago.

“The National Planning Framework (Plan Cayman) document, which sets out a proposed development map for the islands, will be moving forward in the upcoming fiscal year, the Planning Ministry has said.”[vii]

The first phase will consist of a review of the Seven Mile Beach corridor.

According to Plan Cayman the goal for this first step is to “provide the property planning tools to ensure the Seven Mile Beach Tourism Corridor remains vibrant both socially and economically”.[viii] Action points will include a comprehensive inventory of the area, a public outreach programme to identify short- and long-range improvements and capacity modelling exercise, among others.

Why do we need a development plan?

A development plan provides a clear understanding for where things can and cannot be developed. It outlines land availability, ecology, fresh water supplies, sewage and sewage disposal, as well as sets up regulations for various zones such as residential, commercial, beach resort/residential, agricultural/residential, tourism, industrial and so on. It also outlines various zones for public open spaces, mangrove buffers, scenic coastline zones, parks, road requirements and more.

Right now, our current development plan is not only not in line with our current population but doesn’t address where our population could be in the next 5 to 10 years. This causes a myriad of problems. As an example, there is currently no land zoned industrial available.

With only 76 square miles in Grand Cayman, land is scarce. We need to decide as a country how to not only protect our land but make land usage as efficient as possible. This includes parking, set backs, addressing elevation requirements, as well as discussing if buildings should go higher such as beyond the current 10 storeys allowed on Seven Mile Beach.

Land continues to become more and more expensive as less becomes available which undoubtedly increases the price of available land. Changing density requirements in a variety of zones such as residential and beach/resort residential is needed for several reasons. With limited land availability we need to ensure we maximize the land we have available for developments.

Going vertical is the most efficient use of land especially in our strategic Seven Mile Beach waterfront properties where many of the existing buildings are approaching their useful construction lifespan. Now this doesn’t mean we need to build skyscrapers or become the Cancun of the Caribbean. It can be somewhere in between that works for all of us. Interestingly, even farming systems are being designed on a vertical basis where practical to capture the efficiencies of vertical use and thereby maximize space usage.

By increasing the number of units allowed to be developed on certain land parcels by allowing them to go more vertical has several benefits. It will allow developers to keep more of the land parcel as landscaped areas versus solely on the structure itself. It will also allow developers to create more affordable housing within certain developments. Land can be one of the most expensive expenditures for a developer. If they purchase land and can only build 50 units on that land the cost per unit will be much higher than if they can build a greater number of units on the same piece of land.

Right now, developers are faced with a myriad of challenges in building new developments. Many developers are applying for rezoning applications which can be both timely and risky. If a developer doesn’t know exactly what they can build on a specific piece of land many won’t commit to purchasing the land in the first place. This puts developers and new developments into a holding pattern.

The current planning laws don’t address some of the concerns which makes it even harder for developers. The goal posts can be moved at any time. Changes or interpretations can be made retroactively which means developers have to make changes midway through the development phase. This is costly and causes delays. Time is money and all of this impacts the cost of producing properties which ultimately the consumer bears the burden with higher property prices.

Right now, developers are, for the most part, working on projects that have already been approved by planning and/or in construction. These projects could be completed anywhere from between 1 to 5 years. The real problem we will be facing in in 3 to 5 years to come. The delay we are seeing from developers starting new projects will directly result in even less inventory coming to market in the years to come.

We are short on inventory now and every year we don’t create enough housing for the need the pressure, and thus, pricing goes up. The only way to get prices down is to increase efficiencies and change the number of units allowed in certain zones.

Another challenge that developers face which delays development is that the planning department is currently short staffed including only two inspectors. With the amount of development currently in progress, this is a huge pressure on planning and stifles development. The entire planning approval process needs to be streamlined to keep this not only affordable but moving forward in a timely manner. Right now, it is estimated that delays in planning are adding approximately 20% more time to a traditional development schedule.

Development and the environment

Focusing on green development is important not only for our country but the planet but it’s important to remember that this comes at a price. Environmentally friendly building materials such as solar panels, foam block and energy efficient appliances tend to be more expensive than other materials. This increases the price of properties built in these eco-friendly developments. Unfortunately, not every development can be as environmentally friendly as we’d like. Affordable housing units cannot take on all, if any, of these features for them to remain affordable. It’s a double-edged sword and unfortunately right now we can’t have it all. Something must give.

A development plan for the future

The group putting this plan together needs to be extremely comprehensive and include a cross section of multiple experts across multiple fields not just the general public. We need to ensure developers are involved in this planning process as they are the ones who put up the money and take the risk to create these developments.

Government’s position is to slow down development. This isn’t going to solve the housing crisis or the increase in housing prices. This will, in fact, make housing even more expensive and out of reach for many.

The real issue is that we need to find a way to move forward as a country, as a whole, considering the housing need, the environment, affordable housing concerns and the infrastructure needed to handle not only the population we currently have but in the future. We need to grow and prosper, and development is a key component, but we need to determine what types of developments are needed and where.

Conflicts between comments that some people make about housing being too expensive while at the same time being negative towards new development doesn’t solve any problems. We need to work together to build a true a development plan that works for all of us today and into the far future. Unfortunately, it doesn’t look like we will have a new, full and complete development plan for at least two years and that will create more issues for developers and more frustrations for consumers and developers alike as we have no clear direction how we are moving ahead.